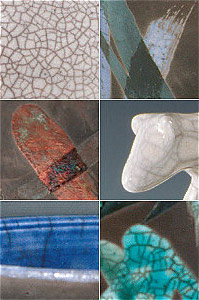 Born in Oakland and educated in nearby San Jose, California, Lynn Dee earned a Bachelor’s degree in Art with Intensification in Ceramics in 1971 from San Jose State University (SJSU).

The influences of her professors can be seen in her work today. Her first ceramics instructor, James Wayne, introduced her to Raku firing in 1966. Further influence and inspiration came from two noted SJSU instructors: James Lovera, who taught her to throw and to appreciate aesthetic shapes and Dr. Herbert H. Sanders with whom Lynn studied advanced glaze calculation, designing and testing base glazes and the addition of colorants. This was during the time period when Dr. Sanders was writing Glazes for Special Effects.

Lynn continues to use and stretch these skills today, as she formulates all of her own glazes. Further notable influences on Lynn Dee’s dramatic Raku ware evolved through her studies with Paul Soldner, the “Father of American Raku”, and Betty Woodman, a leading American ceramicist, noted for her unique thinking about cutting apart, rearranging, and reconnecting thrown shapes.

Commercial pottery ventures have been a recurring theme in Lynn’s career. In 1972 she co-founded Mudflat Pottery in Alviso, California. In 1980, she established a small studio in Fairfax, California. Since 1981, Lynn has been living, creating and teaching art in the Pacific Northwest, first in Bellingham, and more recently on Lummi Island, Washington. Here, a large modern barn affords the space to have her current pottery studio nestled in the forest. From this base, Lynn has taught pottery techniques at her studio, on the Western Washington University campus, at Mt. Baker High School and Beach Elementary School on Lummi Island.